Whats the point in being good

Have you ever had a thought that you’ve been doing good for so long granting people favors like chocolate candies for  free  and then their a time comes when you need those favors returned and next thing you know they turn back on you .And you start to question like is that how i get paid back for the things i have done for those egoistical pieces of crap .Well my friend yep Welcome to Planet Earth no wonder why Aliens don’t visit us :*

Yes gentlemen then you ask yourself whats the point in being good when all you get is get screwed in payback .Hey you would be thinking Doing good means not expecting something in back

Do you really believe that BS and even you do.Lets lend that person 10k from your salary and when you need them they are like dude 10k is a lot of money i don’t have it  YET.Well boy if you couldn’t return it then dafuq you would ask for it .See humans with their broken promises and petty lies .Hey don’t make that ironic face i know you have many disagreements with .But wait right their and think of a person who  used you because you were to blind in that Being Good  Attitude and  you suffered at the end badly getting that feeling  thats right feel it  thats what Stefan Felt when he said that Peace

The last Episode of Spartacus .These were his last words before dying

Spartacus was a slave kept to fight for entertainement of people .He was forced to kill people for the joy and pleasure of people of Capua a city in Roman Empire now in Italy.

These words shine light on how important independence is .My Country is Pakistan and it became independent on 1947.We may been having different problems in our Country but to wake every morning as a free man is a blessing of Almighty that he bestowed upon us.

You see in ancient times when you were a slave.your master could kill you and your life was worthless .A person would be just a property that could be treated in anyway or killed with out any safety from Law. Even in 21st Century their are states that are under conflict and their people cant live their live freely .Minorities in some countries suffer that they cant perform their prayers or celebrate their festivals .So If your reading this and your a free man who has a roof on his head .Parents that love you to death and something to eat for 3 times a day then stop right their and say Shukar alhamdulillah(Allah gave me the best.)

Taken from the Star Wars The Clone Wars Series .When Anakins student suffered a loss he comforts his apprentice with

Take a heart little one

These 5 words they may be random to you like dafuq was he talking .Take a heart little one means looking at the bigger picture .Remember when your grandparents died and every one was crying .They all suffered the loss of close one passing away from this world.That person may be missed or not but you cant just quit life that your grand parents died you have to move on to that sorrow and grief with the picture that they are in better place  .You have to look at the bigger picture that they lived enough in this world and they were sick and  suffering in this world with all the medicines and doctor appointments and may be they were tired of living after a certain time .You get tired of living well i dont know yet am just 20 🙂 but still .So whenever you suffer a loss hey its not end of this world .Whether its the death of a close one or you failed the exam you studied for hard but it has happened and their is nothing  you can do to change that but you can do one thing is .Take a heart and accept what has happened for that would be the only way you could live in Peace

.Well its true think of what you were 10 years ago or 5 years ago and then look at your current self .You thought you would never make some specific mistakes and you did .You thought smoking is hazardous for health and 10 years later your an addicted chain smoker who cant even think straight without narcotics.Or you started doing something that you never imagined you would do in your lifetime .See and then you sit thinking where did i go wrong .Well my friend take one step in wrong direction and before you know it ur in neck deep in that shit you created for your own self .Thats what wayne Unser said after he was in despair he was a sheriff never thought he could be bribed but .Lust for money was greater then his self righteousness thats it Folks Peace 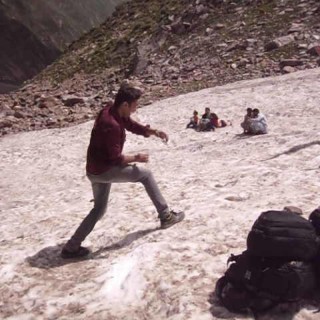